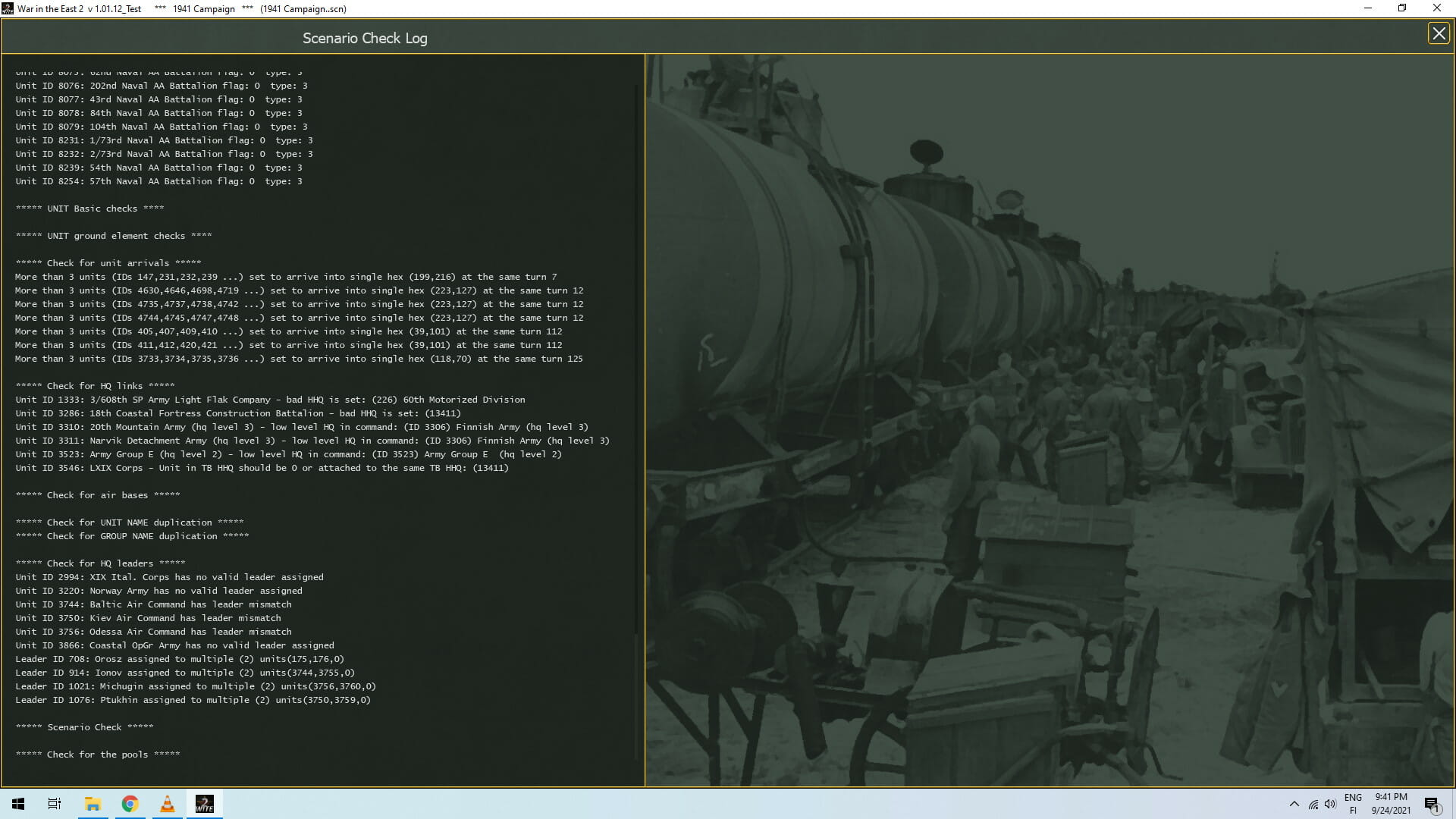 Editing War in the East 2 scenarios can be quite a daunting task. There’s a lot to unpack, and with the lack of an official guide, it will depend on trial and error even for those familiar with the original WitE and War in the West. In this guide, we will go through the basics of the Main Tab. This is where the scenario parameters themselves are set. The rest of the tabs, which are found at the top of the editor screen vary from scenario-specific units to generic data used in all scenarios. We will touch those subjects (such as how to add units in Wite2) in other guides.

The editor itself is opened via the main game menu, after which you need to choose Load Scenario (stay away from editing generic data for now). Once you open up a scenario, you will be taken to the map. Go ahead and close that with the X found at the top row.

You will now find yourself on the main screen of the editor. Keep in mind that the editor itself has many of the features and functionality still disabled. This is promised to be fixed in the upcoming updates.

Setting up the basics in your WitE 2 scenario

Let’s unpack the important bits here. Always, and I do mean absolutely always, the first step you need to do is change the scenario name. There can never be two scenarios with the same name, and forgetting to change this will overwrite the original. When you press “Save Scenario” this is the name the scenario takes, and under which it can be found in the scenario list.

AI ID refers to the AI that the computer opponent will be using once you start playing the game. There’s not a heap of information available on this. The actual selection gives you a range of numbers to select from. What you end up choosing depends on what sort of changes you make. It’s usually best to go with the Yearly GC AIs. Entering zero here will choose Default AI, but again there is not much light shed on what that actually means. Most likely these will set aggression levels for the AI to follow.

End at Start of Turn will be, as the name very strongly implies, the turn the game ends. This is counted as turns from the start date. With the 22nd of June 1941 set as the start date, the maximum value will be 237, which would be the 27th of December 1945. The display shows that you can enter a value between 2 and 250, but any value above 237 will simply default back to the max.

Map NW Limit and Map SE Limit allow you to restrict the game map. The current values that you here encompass the entire map. Changing these will allow you to draw a box for a select area. Do notice that that the “box” must be always drawn in this format of NW limit to SE limit. As a word of advice, as of the latest official patch, v. 1.01.09, this is currently bugged, and the first value of NW Limit will always default to 110 if set as anything below 110.

Admin Points and Admin per Turn are quite self-explanatory. The first is the starting value of admin points each side starts with, and the latter is how many admin points are added each turn. Score Mod allows you to add an extra score modifier for either side. Specifics are not quite certain as of yet, and as such should be left to default values.

Victory Condition can be set as Campaign, Air Battle or Short Scenario. Best left untouched for now as well.

No Unit Rebuild means that in this scenario units will not be rebuilt.

Axis Attack and Soviet Attack are again factors that have to do with the AI, with no explanation available as of yet. Better left untouched.

Axis Men Disabled and Soviet Men Disabled sets the initial pool of disabled men. As you might know, a certain portion of all disabled men will return to duty each turn. Officially used for scenarios starting after 1941.

Clicking on Game Event Editor will bring you to another screen, which will require another guide. Better not touch it right now, lest you break your scenario completely.

Production Usage is quite self-explanatory. It’s a percentage value that allows you to select how much of the total production is available in this scenario. Useful for smaller limited-scope scenarios. The value prompted is between 1 and 100, but it can be set as low as zero, and as high as 255. However, it’s not certain whether higher than 100% will have any effect.

Surrender Flags can be set to No and Yes, and as you imagine setting them to Yes will remove the said country from the game.

Pilot Pools is another rather easy to understand concept. This is simply the number of unassigned pilots available at the start of the scenario for each nationality. Adding too many will certainly break the game balance.

Wite2 Scenario Editor tools and what they do

Here’s another set of things to click that aren’t self-explanatory at all, nor explained otherwise. Unless you have access to War in the East editor manual, which might shed some light. But for that you need to purchase War in the East. Though that manual too is outdated for this newer game. Your best bet here? Just wait for the latest update, and for us to update this guide with it. Don’t touch these. Except for Scenario Check Utility, which makes no changes.

But let’s take a look at what these things might mean.

Initialize Air Units, this should be used once you make any changes to air units in the game. But as it stands, it might just be an outdated script from the original War in the East (where it rebuilt all air groups, whatever that means). Press or not to press, that’s the question. Since Air War is completely different in WitE2, probably best left alone.

Init Rail/Port Values this originally updated in-game functions for the first turn should you have done any changes to railroads and such. Not sure if it is needed currently.

Update All Unit OBs, this one brings all OBs to the current date (or closest to it). Useful if you make drastic changes to dates. And if it works. Most likely will just screw up everything.

Reset All City Control, another obsolete function that was used to reset city controlled to whoever controls the hex.

Set All City Supply Requirements, who knows what this really does.

Upgrade All Factories, like updating OBs this one will bring factories up to date (such as changing to newer models). On the other hand, not quite sure if this one works either.

Damage Off-Map Rail, again not something that has any obvious usage. Don’t touch.

Repair All Rail, if I had to guess this one repairs all damaged rail. But does it tough?

Remove Units, removes all units from the map. You will be given a prompt for all on-map units, all air base units, all units in cities and detaching all air groups for air bases. Doing this will probably crash the editor.

Remove Off-Map Units, removes even off-map units. Though what that means is uncertain, as it certainly doesn’t touch units in theatre boxes.

Remove All Forts, removes all fortifications levels from all hexes.

Clear Amphib and Airborne data is not something that we have an explanation for.

Set Weather clicking this will freeze the editor for quite a bit as the computer goes through calculations. Seems to randomize the weather for the first turn, based on weather parameters from generic data.

Load Recorded Script this is a function, which again deserves a separate mention in another guide, which allows you to “record” a move by move script for the AI to follow on the first turn.

Clear Recorded Script and this clears the above script.

Reset Unit Support Values, is something we haven’t figured out yet.

Dump Dat Files, this one isn’t obvious either.

Detach Leaders in Delayer HQs, supposedly will remove leader assignments from all HQs that are set to arrive as reinforcements. Perhaps useful, perhaps game-breaking.

And as we said, at the bottom you find the only useful function: Scenario Check Utility. This will check for anything and everything that might break the game. Do take note that not everything it flags is necessarily a game breaking bug, such as duplicate names. Or for example, more than three units set to arrive in the same hex (they’ll just arrive in nearby hexes). It’s good to run this one every once in a while.

And that’s it for our explanations that didn’t quite explain all that much. We suggest you keep this page in your mind or perhaps bookmarked, as it will be kept updated once the new version of the editor is released. Until then, play around and break your scenarios to find out what does what!