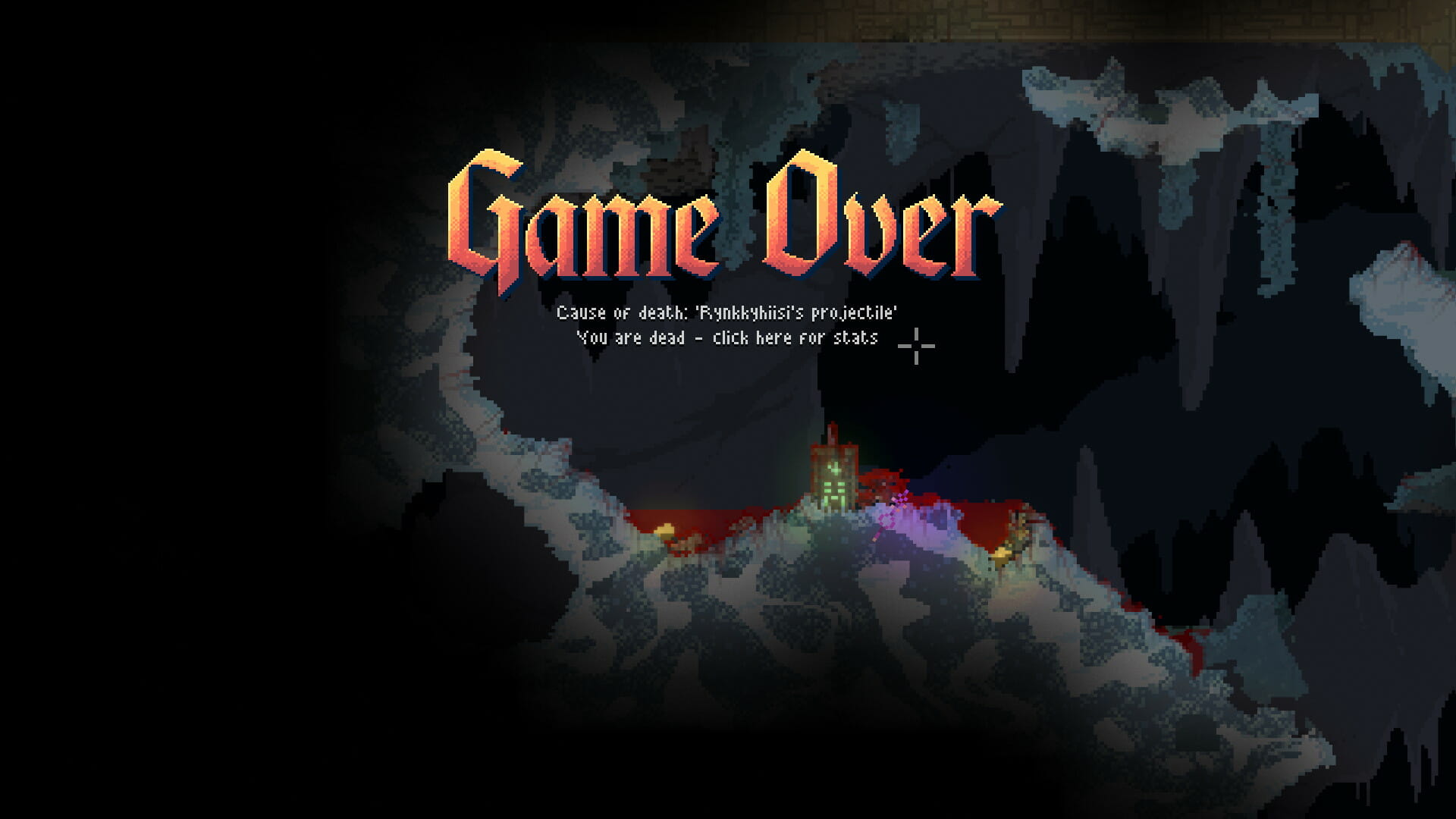 Noita is Finnish and stands for witch, sorceress, warlock or some such magic-user. Those are the boots you are going to strap on as you descend, or levitate, through the procedurally generated levels, aiming to reach the bottom and whatever horrors await in the darkness, destroying and defeating everything around you with the wands, bombs, potions and other tricks you have up your sleeve.

This is a roguelike game, which also borrows heavily from “cave fliers (luolalentely in Finnish)”, a genre of video games that was very popular amongst the amateur coders, and players, in Finland back in the 90s and early 2000. The game offers superb fun and fast action combined with permadeath difficulty.

Get Ready to Die a Lot

Noita is a very easy game to get into. You always start the game from the same position, at the mouth of a cave with quick instructions on how to control your character inscribed on the walls. Enter the cave, and start finding your way downwards. The character starts armed with two low-level wands and a potion. You can pick up more wands, edit them and purchase them as the game progresses. You’ll run into more potions constantly and can even fill them from the many different liquids (of which blood seems to be the most common one) that flow through and pool up in the caves. There is an alchemist system in place as well, and you can combine different liquids and terrain types for different effects.

But before you get to fully explore all these you are going to die a thousand times. And this is a permadeath game, which means that all your progress is erased, and you start at the mouth of the cave again, which leads to a whole new dungeon generated from scratch. It’s not just the many enemies which are going to mercilessly slaughter you, and each other, but you yourself.

Equip a spell that you don’t know and it might just end up blowing yourself up. Equip a spell you do know, but have it bounce the wrong way and you’re toast. Start a fire to clear a room and catch your robes aflame. Dive into a pool of toxic sludge and poison yourself to death. Wander into the wrong area and face horrible enemies. Polymorph into a sheep and get one shot. Polymorph into a Dune-like worm and anger the gods. Teleport away from a dangerous enemy and end up surrounded by a dozen more. Or just walk into the lava to test what happens. Luckily, this is all part of the gameplay and not as harrowing as it might sound.

You’ve probably played one of those FPS games and such that boasts things like “destructible environment”. Well, in Noita everything is destructible. Or rather, every pixel is actually something, and not just background colour or ready-made tiles. And you can interact with all of it. Given enough time and patience, and the right wand, you could dig yourself all the way to the final level. The different biomes and terrains function in different ways, as do different liquids and gases. Often trying to take advantage of these sorts of actions, once again, lead to untimely death.

There’s no hiding the fact that this is what makes the game so much fun. Drowning your enemies in a sea of acid, nuking the entire level below you, or just exploring otherwise inaccessible areas with the help of bombs expands the experience in countless ways. Surprisingly, this doesn’t require as much from the computer as you’d think.

Let’s Get Through the Basics

So, you move around with your keyboard, levitate with the help of your magic and shoot enemies with your wand. That’s easy to understand and hard to master. The purpose of the game? To enter the dungeon, or the caves in this case, and make your way through them. But how does it all play out?

Health keeps you alive, Levitation mana determines how long you can keep flying, and effects stack up from various sources. Drenched in water, on fire, suffering from poisoning, or being under a hostile spell will affect your movement and health in various ways. Likewise, positive effects can turn you into an unstoppable killing machine. Dose yourself in blood and you start scoring countless critical shots.

The core of the gameplay can be found here. Wands are your guns, firing away different spells every time you click the mouse. The player can only have four wands at any given time, so you need to trade for better ones as you find them. Each wand comes with different statistics (such as mana, speed, regeneration), which obviously improve as the game progresses.

Each wand also has a set amount of slots, which you can fill with different spells and effects. You can build a wand that teleports you at random or into a chosen location, fire arrows at machinegun-pace all around, or summons rain and fire upon your enemies.

To make it past the third level you really need to know what you’re doing here. And you only learn that by trying out different combos. As a hint, you should have different wands for different purposes, and you should be ready to ditch them whenever something better comes along. Though often, you end up just doing what you can, frantically trying to run away and survive the sudden onslaught.

Each biome or cave is a level of its own. Your mission is to get to the bottom, to reach a teleport to the Holy Mountain. This is a special rest area, where you can replenish your health and spells, buy wands and change spells, and pick perks. But you don’t have to head there right away. The gameplay area extends sideways, leading to completely new and unexplored areas. And who’s to say you can’t head up? You should always hunt for wands, gold and potions before heading to the next level.

…it’s worth pointing out that the levels are more like sections. The map itself is without any borders, and if you have the tools for it you can dig yourself up or down as you wish, going back to previous areas. These areas offer different setups, from ice to lava worlds, hard rock to sand, and much more…

Perks are as important as wands. They affect the gameplay in dozens of different ways, from slowing down projectiles to summoning friendly rats, tentacles to lash upon enemies, making it easier to fly around to freezing all liquids around you. Some of them seem completely useless, which makes it important to build a perfect combo. But that’s hard when whatever you get assigned is a choice between three random perks. Sometimes you get lucky, and sometimes not.

Potions, or flasks, can be filled with whatever liquid you happen to find yourself be swimming in. It’s always useful to have at least one to wash off the effects of poison or fire. They do have tons of other uses too, and they can be found randomly in the caves.

Probably the most important thing is gold. You can mine it, should you have the right wand. Otherwise, you’ll just have to collect it from all those dead enemies. Between the levels you can use it to buy spells or wands, or re-roll the perks if they are not to your liking.

The other important pick-up is health. You can never have too much of it, and should always try to find at least one such power-up at each level. Unfortunately, going out of your way to find things usually just leads to trouble. And that’s where the extra health comes in handy, so it’s a bit of a catch-22. There’s plenty of other random artefacts to find too, and tons of easter eggs and even things resembling lore and a story.

There’s probably a couple of hundred different enemy types, though most are variations of some basic idea. You start rather easy, with spiders and lowly orcs bothering you. The enemies quickly rank up and come in ever-greater numbers. As a note, all the names for the enemies are in Finnish, in case you were wondering why they seem like made-up nonsense.

The variety is quite refreshing, though it might take one or two times before you’ll know what exactly you’re facing. This again leads to some untimely deaths.

Getting to the third level, or sector, is rather easy. You can just do it with pure luck, speedrunning to the bottom. But from there on the difficulty quickly becomes a bit nigmarish. If you’re not busy trying to escape and fight dozens of enemies, you’re probably busy trying to run away from effects and spells you didn’t mean to cast, but did because there was no other choice…or because you just panicked.

Suffice to say, I haven’t managed to beat the game yet.

There’s a Story too, Right?

There’s isn’t much of a story here. Or at the very least, you don’t really have time to concentrate on it. On the other hand, the story sort of opens up as you make your way through the world. Sure enough, it might be one of explosions and violence, but it’s a story nonetheless.

And there are some scrolls and such to collect, which open up on some of the details of the world of Noita. But really, this is a game of action and destruction.

Summary of our Noita Review

If you’re looking for something to balance your grognard strategy gaming, Noita is an excellent pick for fast no-brainer action. It’s good fun for five minutes, but challenging enough to keep you restarting for the tenth time in an hour too. It doesn’t demand much from the computer, and yet manages to simulate massive levels. Being a roguelike, the action is unforgiving. The graphics might be a dividing factor for some, but I find retro-pixel gaming like this quite refreshing.

All in all, a good game for some good fun.