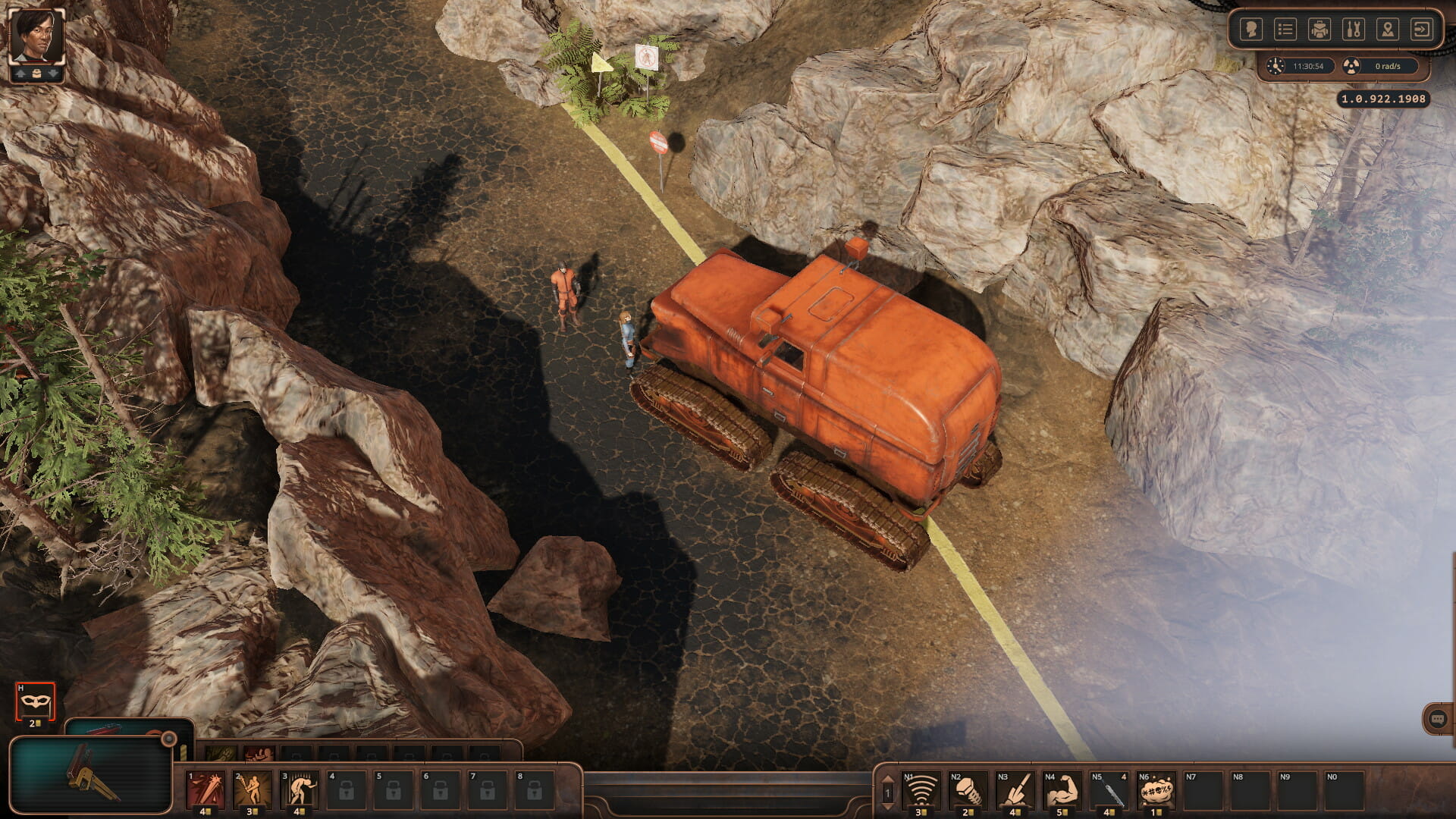 So, once I left those freshly poor bastards at Concord Station, and headed to Nashville to fulfil the mission given by the head-honcho of the main organisation under the dome, I didn’t expect to be running into problems straight away. Halfway there the truck was hit with a rainstorm, radiation, an anomaly or something like that. The specifics weren’t clear to me, and clearly not to the driver either, who also isn’t much of a mechanic.

As luck would have it, bad news are followed by good ones. Instead of being stranded in the middle of nowhere, we ran out of steam just outside a gas station.

What’s there to steal here besides gas?

Leaving the truck and the useless driver behind, I went and scouted out the gas station. Home to a guard, a scientist, some old dude, and a bunch of dope heads, there’s doesn’t seem to be too much to repurpose here. Nothing that can be stolen and stored in the truck anyways.

A few friendly chats later it turns out that the basement holds some ancient artefact that can fix the truck. What the old man, who introduced himself as Melville, forgot to mention is that the previous owner was there in some sort of zombified state. A few good whacks to the head with my trusty wrench, and he wasn’t a zombie anymore. And since the owner of the basement was now dead, I saw it fit to pocket everything within, including the Encased artefact know as Brass Apple.

A negotiation and a picnic

My adventures in the basement and the return to the surface left enough time for some sort of kerfuffle to developed at the gas station. A bunch of rednecks were demanding gas, goods or whatever. Using my status as an intimidating criminal I had a word or two with them, and they hastily packed up and left in their car towards unknown destinations. This that Melville guy saw as some sort of proof of character, inviting me to a picnic. Of course, I had to prepare all the food and invite everyone to enjoy the feast.

And to do this, I had to head down to another basement. This one was fulfilled with rats, promptly dispatched, and with all sorts of goods that I saw fit to confiscate. I also fixed the generator, since I am a good person that likes to increase his experience with such things. Having gathered the items and cooked them into a pot roast, I invited the kite-high patrons, the guard and everyone else to enjoy the dish with me. The driver was the only one to refuse, insisting to wallow in her depression instead, understandable since if she cannot fix her own truck what is she really good for?

During the picnic, everyone had a few drinks, which suited the situation for me. After all, now was the time to pick some pockets.

A handful of grenades later

Emptying all the containers, shelfs, boxes, bins and shelf was easy enough stuff. Rather surprisingly though, I run across one box with the engraving “Your Personal Box” on it. Though I have no idea why it would be mine, besides the fact that everything is now mine, I decided to put it into good use. Nothing valuable went there, but emptying my pockets out the blots, wires, dirt and other bits and pieces left a lot more room for better stuff.

After that, it was pretty straightforward. Sneaking around, checking pockets and emptying them. The people here had some pretty good stuff. But what I was the most surprised by was the sheer amount of explosives these guys were carrying around. Grenade after grenade found its way into my backpack. The downside is that I seemingly have no idea what to do with them. How do you activate a grenade? Or throw it for that matter? Or who do I use them for? Doesn’t matter, they’re all expensive and shiny, and that’s gotta be a good thing. It’s a good haul overall, and perhaps even a bit better than in Concord.

With everything done, it was time to leave the station. The driver at least knew how to install the Brass Apple, and this brought the truck back to life. We continued our journey, eventually reaching Nashville. And once again, things took a turn for the worse…